Who am I? I'm a fucking veteran.

I spoke with my dad the other day.  It was great to hear from him, but I swear, every time we speak he sounds like he's turning into Walter Sobchak from The Big Lebowski. 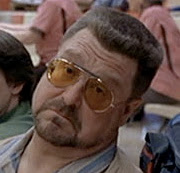 Not that he's going to pull a gun in a bowling alley or bite someone's ear off, he just says really random things and gets off his grid by speaking to himself or tangentially ranting.  Speaking of tangential, I think this might be one of my favorite words.  It sounds like some sort of orange dreamsicle flavored pudding pop.  Am I off-base on that one?  Anyways, he's visiting Mankato this summer and some of my uncles might show up, too.  We're going fishing.  Where--I'm not sure, yet.  I'll need some suggestions from people in the area.
And if anyone's down for fishing anytime, let me know.
So shat DeWolf at 12:41 AM

Tangential is a great word. I use it often to sound intelligent.
Anyway, if you want to know good fishing areas, talk to Dave. He's the resident fishing expert. And I'd go fishing anytime. I didn't get a chance to go before it got balls-cold.

Clisbee's mentioned a few places. We should get a group of anglers together for a fishing trip when it gets warmer. I don't think I'd ever go fishing when it's this cold out.