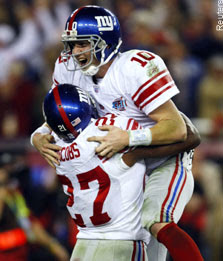 Well, the first team to go 16-0 in the regular season has a perfect ending--a Super Bowl loss.  I think, as Joe put it, that the arrogance of Belichick and the rest of the Pats made me root for Eli and the Giants.  Even though that means we have to listen to members of the '72 Dolphins pat themselves on the back for their 17-0 season (including playoffs and Super Bowl), I'm still glad the Giants won.
What was almost as impressive as the win was the way it happened.  Holding Tom Brady and the most potent offense in NFL history to just 14 points and driving the ball in the last two plus minutes of the game for a winning TD made this game one of the best Super Bowl's I've ever seen.
It was also refreshing to see a halftime show that had an act football fans would actually want to watch.  Michael Jackson, Britney Spears, Janet Jackson, 'N Sync--these are not the performers that the average football fan prefers.  The commercials, overall, were pretty lame, but I can't help wonder how many hits godaddy.com received for their "watch Danika Patrick expose her beaver on the web" commercial.  I know I checked it out.
So shat DeWolf at 10:17 PM