Negative reviews--whether it be for movies, music, or books--are usually a fine source of entertainment.  Amazon.com is a fantastic source for negative reviews.  For books, you either find some pedantic rant about how pretentious the writing is, ultimately displaying the portentous nature of the reviewer; or you'll get a short blurb about how the reviewer didn't "get it", thought that the message/content was beneath them ("It was a waste of the 3 hours it took me to read the entire thing."  Good for you, Speed Reader!), or they simply didn't finish the book.  (How can you review a book that you haven't even finished?)
One- and two-star reviews have never turned me away from reading a book, nor have they ever made me upset.  I've never felt the need to defend a book to someone who didn't like it because taste is subjective.  Even critiques on the writing--style, use of metaphor, voice--don't get me up in arms, making me want to beat some sense into the person reviewing the book.
I read Joan Didion's, The Year of Magical Thinking this weekend for my contemporary prose class.  Didion chronicles the year following the death of her husband, which occurred while their only daughter was in a coma.  It might be the most heart-wrenching piece of nonfiction I've ever read.  This is because of how the information is released.  Didion avoids telling the reader the emotions she feels.  She doesn't have to.  Her actions tell you exactly what she's feeling. 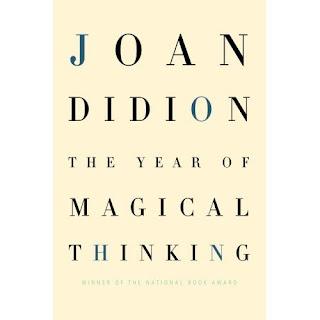 Some of the negative reviews on Amazon.com for this book really got to me.  People suggested that she was cold, analytical, that she's both showing off her ability to research in addition to dropping names that any Googler could have done.  They say they wanted to experience the typical emotions felt when a person is grieving: despair, trauma, desperation.
These people missed it, I'm sorry to say.  Yes, she's cold and she's constantly citing various works and publications (whose quotes cannot be found on Google).  But this is how she's dealing with the loss of her husband, a person who has been by her side for 40 years.  She's looking for answers; she wants to understand how and why this happened; and she keeps looking back to see if there were ways that she could have foreseen this event.  She wonders whether she could have prevented her husband's death.
Her refusal to accept his death, the massive amount of research in an attempt to gain an understanding on this situation, and the constant replaying of events that are connected to his death show the reader how she is handling herself.  There is plenty of despair, desperation, trauma, and heartache in this book.  But Didion is not going to tell you that.  She shows you. There are a handful of lines that reoccur throughout this book that are calculated and relevant, and these lines show you how she's holding back and subconsciously refusing to accept that which has happened.
I guess it's the fact that these wannabe NY Times reviewers were hard on Didion's character that upset me.  Not everyone deals with loss the same way, but to suggest that Didion reacted incorrectly because those readers weren't able to identify that she was grieving is irresponsible.
But then I check these reviewers other reviews.  How to play tennis, Oprah Book Club books, and Dan Brown got good reviews.  Hmm.  Does that put their credibility into question, or am I just an asshole?  I'm not saying that everyone has to like this book.  If you don't like it, fine.  It's just the negative things that people had to say about it irked me, is all.
This guy is the best reviewer on Amazon.com.  He dishes out poor reviews like Bush cuts taxes for the wealthy.
So shat DeWolf at 1:06 PM

I reviewed Pynchon's "The Crying of Lot 49" without finishing it. Gave it a negative review. Normally I would whole-heartedly agree with you about reviewing books that you haven't finished. But even the thought of reading one more page of it angered me.

I accept any criticism that might come my way! I stand by what I did! Worst book ever. I'd rather read "Naked Lunch."