Day of the Douche Bags 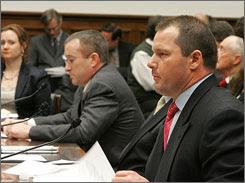 On the day that Cubs pitchers and catchers report to spring training in an attempt to break their 100 year title-less drought, the U.S. House of Representatives are holding the Clemens-NcNamee hearing. And things aren't looking too good for either one of these guys. Clemens can't sit still or look any of the reps in the eye when answering their questions. His wife, Debbie, and his best friend and former teammate, Andy Pettitte, have both contradicted Clemens's testimony. But NcNamee hasn't helped himself, either. He admitted that some of his previous testimony is untrue--a loose stitch that I'm sure Clemens's lawyers will tug at if this whole mess ends up in court. I think they have enough to discredit NcNamee and would be able to plant the seed of doubt in a jury if this turns into a perjury case. I don't care who's telling the truth, they're both assholes. Thanks for further tarnishing the integrity of the greatest game ever made, douche bags.
Here's another gem. Kelvin Sampson and his staff have allegedly violated restrictions placed on Indiana University's program. He is on probation for recruiting infractions from his previous head coaching job at OU. And while the recruiting tactics he used to sign Eric Gordon were legal, it was shitty that he didn't communicate his intentions to Bruce Webber, coach of the Fighting Illini, the team to which Gordon originally committed. I hope Sampson gets what's coming to him.
So shat DeWolf at 12:02 PM

Clemens is as guilty as sin. McNamee is just a scumbag. And Kelvin Sampson, as we have previously discussed, is the shadiest character in NCAA basketball.