April's right around the corner 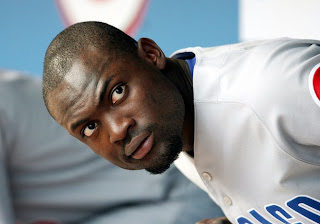 Ever since news broke of Felix Pie getting Mendenhalled, I've been feeling sympathy pains for the guy. This is not to be confused with pulling a Mendenhall, whereby a legally blind radio sidekick goes around the Anaheim Angels' hotel knocking on player's doors at dawn in an attempt to help out the Sox during the 2005 ALCS. I'm talking about "testicular torsion." That's where, according to Mendenhall, your left nut winds up occupying right nut territory.  Unlike Mendenhall, however, it appears as though doctors will be able to save Pie's twisted nut.
I've been able to catch three Cubs games and two Sox games on TV since being back home.  A third Sox game will be on CSN later today.  I can't wait--not because I'm a Sox fan, but because I love watching baseball.
Kerry Wood has looked good, from what I've seen.  He's consistently hitting 97-98 mph on the gun, and his command looks better than ever.  The best part is that his mechanics look fantastic.  He's not over-throwing or twisting his elbow like he did in his first 9 seasons.  The fact that he's abandoned his power curve probably has something to do with that.  Now, he's incorporating a two-seamer and a tight-spiraled slider to go along with his 4-seamed fastball.  He's got a nice, easy rhythm that can only help him make his case for becoming the new Cubs' closer.  While Marmol has yet to allow a run this spring, I still think Wood's got the edge over him because of the command issues.  Marmol's looked wild, his fastball's been topping out at 92, and he hasn't been facing opponent's starters.  Nothing's been decided, though.
I wish the season would start tomorrow.
So shat DeWolf at 12:23 PM