Here's to my asshole neighbors

I live in an 80 year old house that's split into 3 apartments.  There's the basement, the main level, and the upstairs.  I'm upstairs.  The main level unit is occupied by two brothers--twins.  One plays guitar, the other plays bass.  They play their instruments whenever it is convenient for them to do so.  Often, that happens to occur after 1am.  And even though the guitarist plays an acoustic and the bassist plays at very low volumes, they forget two important details: 1. The house is 80 years old and the walls are about as thick as tracing paper, and 2. Bass travels well no matter how much the volume has been lowered.  I've never complained about it because they happen to play music I like: Metallica, Pantera, Opeth, Led Zepplin.  I feel sorry for the two people who live below them because they don't look like the sort of people that appreciate hard rock and metal.
There are enough parking spots at this house to fit 4 cars--3 along the side, 1 in the carport in back.  If you double up in the car port, which the tenants in the basement do (bless them), there's room for 5 cars.  At the beginning of the school year, there were six cars that belonged to people residing here.  At least one car would have to park in the church parking lot behind the house.  That was fine when it wasn't snowing, but during winter the church threatens to tow when it snows.  Both of these brothers have girlfriends.  They each have cars and like to park along side the house and spend the night, leaving actual tenants--the people who are paying to live here--shit out of luck.  I mentioned this to the brothers, asked them if they could tell their friends not to park here seeing as there aren't enough spots for us.  They had said okay, then looked at me like I was the asshole.
The front door of the apartment doesn't always close; we've got a cranky dead-bolt.  These twins like to throw parties.  Their friends like to smoke.  We're not allowed to smoke in the house--fine by me, I don't do well with cigarette smoke.  Their friends don't close the front door when they smoke.  It creeps into the house, through the cracks of my front door, and rises up to my room, chasing me into the closet where I curl up into a little ball and end up sucking my thumb.  I'm a wuss.
Sometimes, these parties last long.  Sometimes one of the brothers or one of their friends gets into an argument with one of their girlfriends.  They leave the brother's unit for privacy and stand in front of my door to yell and cry and throw their fists into the wall.  Sometimes these parties take place on Monday nights and they go on until 6 o'clock in the morning.  That wakes me up.  That makes me mad.  Especially when I didn't get to bed until 2am because there was a party going on downstairs.
I didn't go downstairs to ask them to quiet it down for two reasons: 1. It sounded like things were being wrapped up (even though they didn't conclude until around a quarter to eight), and 2. I, too, am an asshole.  A special kind of asshole.  The kind that would rather exact revenge, than plead my case to fellow assholes.  They won't listen to me anyways.  Their girlfriends still park along side of the house.
Also, one of the girlfriends, the hippie that rubs that nasty patchouli shit in her hair, thus making her smell like there are constant pudding stains in her underpants, she likes to piss me off the most.  Her and her damn Dodge Neon.  She parks in my spot more often than the other one.  She has to be heard when there are too many people talking in one room.  She sounds like Daisy from Rock of Love 2, if you've seen the show.  She decided to write me messages in the light dusting of snow on my car last night.  Messages like "I heart (the shape, not the word) peace (again, the symbol)."
If she's so into peace, why does she want to start a war?
Now, I said earlier that I was a special kind of asshole.  Four hours of sleep will do that to me.  I tried to think of a way to give them a taste of their own medicine.  So at noon, four hours after their party died down, I decided to check my music library for the perfect wake-up call.  There's nothing worse than getting only four hours of sleep after a long night of drinking.
I found Tricky.  If you've never heard him, know this:  His voice is gargled gravel, he uses mostly percussion, he has a creepy girl doing spacey background vocals, there's a lot of bass.  Here's one of the songs (youtube doesn't do the bass justice):

Currently, we're on disc 2 of this "I'm going to wake you up with obnoxious music like you did to me, you goddam cock-rags" day.  The volume on my stereo is riding at about 3, which is surprisingly powerful.  My ears are buzzing, and I can't hear a damn thing between songs.  Remember, my walls are paper thin.
Right here, assholes. 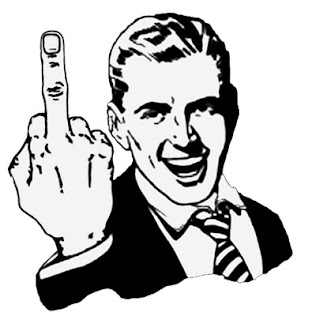 Would this be considered passive, over-aggressive behavior?
Next up, Angel Dust by Faith No More.  Or maybe some Slayer?  God Hates Us All?  Sounds like a plan.
So shat DeWolf at 12:11 PM

I used to do the same thing with my next door neighbor last year. I never complained cause I felt it was unwarranted since he'd play during the middle of the day, that just happened to be when I liked to sleep, so I'd blast showtunes, he'd usually turn off his music within 15 minutes.

One of my old roommates from SIU started his undergrad work at Indiana University and was on a rowdy floor his first year in the dorms. He made a 74 minute CD of a driving bass line, cranked it on repeat, and locked his door before going to class. This was in response to excessive weekday partying. He transfered the next year. To SIU.

I think if you look up passive-aggressive in the dictionary, this is the exact situation they use as an example. Word for word, I swear.

Might I suggest what I am dubbing the "wash, rinse, and repeat" method, in which you blare the music for a few minutes, turn it off for a minute or so, and then blare it again. And then repeat. This way, they think in that moment of silence that the music is over, and that they will be able to sleep. They drift off for a second, and then are cruelly woken up once again, pissing them off even more. Trust me. It's torture.
-joe