What could have been

Jim Hendry, you balloon-knot, why couldn't you just pick up the phone? 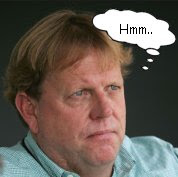 Now, I don't know how well Hunter would have fared roaming center field in Wrigley; he does have a tendency to crash into the fence when tracking down deep shots. There's also a strange disconnect that players coming from Minnesota seem to have once acquired by the Cubs--they suddenly forget how to perform as well as they had while with the Twins (see Latroy Hawkins and Jacque Jones). I blame previous Cubs' coaching staffs. But the fact that Hendry didn't even bother to call Hunter? That's unforgiveable. He should have stuck it to Zell and spent, spent, spent. It would have made this team better, and isn't that his job? He spent too much damn time concentrating on Kaz Matsui and Brian Roberts. Why? Because he's a balloon-knot. Cubs fans will now have to play the wait-and-see game to determine whether or not Pie or Fuld will pan out in center. I just don't see a championship in this club's future any time soon.

I think balloon knot is my knew favorite insult.