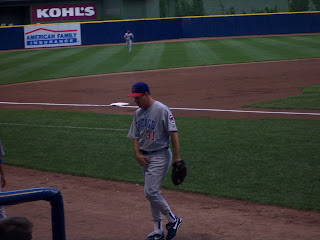 Greg Maddux was able to accomplish the seemingly impossible among Padres starters, yesterday.  He pitched not only one, but two scoreless innings in his first outing of Spring Training.  The other four Padres starters have combined to allow 11 earned runs over 5 2/3 innings.
Mad Dog only needed 18 pitches (16 for strikes) to retire 4 Giants on ground balls and 2 via the fly out.  He did not allow a single man to reach base.  When interviewed about the outing, the Professor stated that he was disappointed with his control and felt that he got away with a few.
He is 8 wins away from passing Juice Clemens for 8th all-time in career wins.  Seeing as he's won at least 13 games every season for the past 20 seasons (something Cy Young hadn't even done--19 consecutive seasons win at least 13 wins), I think he'll pass that roid-raging Pinocchio, no problem.  If he has a really good season this year and chalks up 17 wins, he'll pass Warren Spahn for 5th place all-time.  As of now, with 347 W's, Maddux is only 164 wins and about 12 seasons away from catching up to Cy Young.
So shat DeWolf at 12:20 PM

Lincecum is going to be an ace once he turns 16.

Davis settles into his lawn chair on the banks of denial.

It's really all I got going for me right now.