Today is Casimir Pulaski day; and if I were back in grade school in the suburbs of Chicago, I'd have the day off.  The only thing I know about the man and his day is that Pulaski voluntarily fought and died for America in the Revolutionary War, and there are a lot of Polish people in Chicago.  We definitely got the first Monday-in-March off in grade school and junior high; I'm not so sure about high school--whether that's due to habitual drug use or the result of repressing those memories, I simply can't (or refuse to) remember the details.
Side Note:  Did you know that if you snort Darvocet ground with Cialis, you'll sport a 36 hour, pain-free boner?  Just throwing that out there.
Anyways, I will enjoy only ah beer in Pulaski's honor, as there is work to be done today.  The decision as to which beer to enjoy is quite the dilemma.  I have two options: Leinenkugel's limited edition Northwoods, or Samuel Adam's limited edition Irish Red.  Both are fantastic.  I could drink one of each, but I don't trust myself to stop after two.  You know how it is.  You drink two beers, then two more.  And so on, and so on. 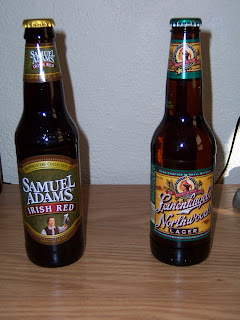 According to my Leinenkugel's newsletter, it's been two years since Northwoods has been produced.  A long two years, I might add.  The beer was only being brewed for distribution during the month of February.  Minnesota, Wisconsin, the Dakotas, northern Illinois, and parts of Michigan were the only available locations to find LNW.  I wasn't able to find it in Mankato until Friday when MGM suddenly decided to carry it.  As for the Sam Adams Irish Red, I had never heard of it before.  I noticed one six pack on the shelf when searching for the LNW and thought, why not.  It's pretty damn tasty.  Better than any other Red I've had, though I can't presently remember all of the Red's I've had over the years.  That, I can assure you, has nothing to do with repressed memories.
So shat DeWolf at 2:23 PM

Definitely your father's son! I think I'm gaining some insight into your situation that was too complicated for me to understand or maybe for you to explain after mixing alcohol and drugs.

just because your post made me think of it:

When I was killing time during the longest rain delay in Cubs history (the night of Maddux's 3,000 K), I walked into a bar in Wrigleyville. Thebarkeep asked what I wanted.
"Something local," I said, thinking Goose Island or the like."
He opened a longneck Old Style and set it in front of me. "Four bucks," he said.

PBR has gone the way of Old Style in Chicago. It's become fashionable to drink shitty beer, I guess.